Stop The Press. Here Are Our Picks For The Top 5 Fashion Moments From NYFW S/S23

New York Fashion Week S/S23 came in packed with more action and drama than any other event this season (we’re looking at you spit gate). Cristian Siriano opened the week with both ’90s icons Janet Jackson and Alicia Silverstone cheering his all-inclusive collection of frilly, frothy gowns. Prabal Gurung packed a punch with latex and tulle— executing some serious maximalist drama. Puma and Tommy Hilfiger made a stylish NYFW comeback and Area left the audience in awe with a thought-provoking show.

This time around, it wasn’t just the ramp that was star-studded—the glamour quotient on the front row was equally high. We’re talking about life imitating art where Anne Hathaway attended the Michael Kors show dressed like her most fashionable character: Andy Sachs of The Devil Wears Prada. Decked in a brown leather jacket layered on a black turtleneck dress, Anne even sat next to the real-life Miranda Priestly, IYKYK. 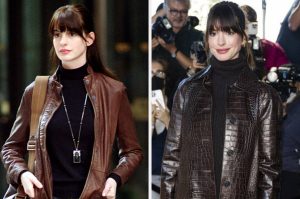 In case you missed it, here are the headlining moments from New York Fashion Week S/S 23:

1. Peter Do  Ventures Into Menswear

If you’ve witnessed Peter Do’s aesthetic in womenswear, you knew that a menswear line is in the pipeline and it’s only a matter of time before he unveils it. What better platform than NYFW to debut his first-ever menswear collection? Peter’s presentation featured a monochromatic palette of black, white, grey and a dash of neutrals—crafter in fabrics like silk and leather. Jeno from K-Pop group NCT played muse and opened the SS23 show for the designer held in the Big Apple.

2. NYFW Partners With Genentech To Dedicate A Show To The Disabled Community

NYFW joined hands with the biotechnology company Genentech and Open Style Lab (OSL) to come together with the spinal muscular atrophy (SMA) community to launch Double Take, a unique fashion show starring members of the community. The idea was to introduce adaptive clothing designed by OSL and modelled by people representing the group for a more inclusive and diverse take on fashion.

3. Marc Jacobs And Kim Jones Come Together To Celebrate 25 Year Of The Fendi Baguette

To mark the momentous occasion of the legendary Baguette’s 25th Anniversary—Kim Jones, Fendi’s artistic director of womenswear, invited his friend and mentor Marc Jacobs to create a small collection tributing the Baguette and the brand. The pop culture queen who first popularised the bag in the 3rd season and 17th episode of Sex And The City—Sarah Jessica Parker a.k.a Carrie Bradshaw graced the first row for the show and fashion has now completed a full circle.

Tommy Hilfiger returned to NYFW after a 3-years-long hiatus—building up on the excitement, the brand launched Tommy Factory: an experimental, creative playground. For its Fall 2022 campaign, Tommy Hilfiger tapped into Andy Warhol’s famous NYC studio for inspiration. A space where artists, musicians, and literature experts would gather would come together and work on their craft. Influenced by Warhol’s physical factory for innovation, the Tommy Factory is a state of mind that will function on the same virtues of creativity and collaboration. 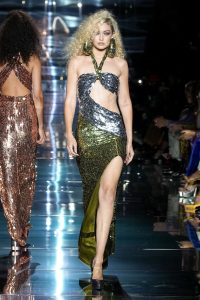 Tom Ford drew the curtain on the SS23 of NYFW in true Tom Ford style. Starry front row and the ramp, all decked in Tom’s signature bling, dipped in heavy ’80s disco. Reminiscing the era of Studio 54, supermodels like Bella and Gigi Hadid strutted down the runway in sequinned cut-out gowns, big-bold hair and even bigger accessories.

For all the latest articles on NYFW, tap here.