The invincible child of woe will be back at Nevermore for season 2 and the fans are delighted. After the roaring success of Wednesday season 1 on Netflix, (I mean, it even dethroned Stranger Things as the most-viewed English-language series by clocking a record of 341.2 million hours) the return for season 2 was almost inevitable.

I’ve identified with Wednesday Addams’ personality all my life—resting bitch face? Check. All black clothes every day? Sign me up! Constant aversion to humans, matching emotions right there. Naturally, when the latest rendition of the popular Addams Family hit Netflix, it instantly got me excited—I almost gave out a smile, I promise. What got me even more intrigued was the cast and the director behind it. Known for creating a whole genre of dark and gothic fantasy, Tim Burtons was now behind the camera to give this popular family (especially the feisty daughter) a whole new spin. 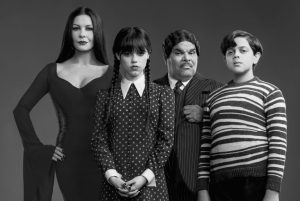 Jenna Ortega’s casting for Wednesday was a definite match made in dreary hell (heaven is too vanilla for her). The 20-year-old started acting back in 2012 with a few guest appearances in big projects, but it was her supporting role in Insidious: Chapter 2 the horror film that got everyone’s attention. In fact, Jenna literally manifested the role of Wednesday Addams when she referred to herself as ‘Wednesday’ the middle child, back when she played the lead role of Harley Diaz in the Disney Channel series Stuck in the Middle.

The show holds you from the word get-go. Wednesday the outcast, who doesn’t fit in with the normies, goes to a school full of outcasts and still manages to stick out because of her deadpan energy—no surprises there. Jenna’s navigation of this new world, while she unravels the mysteries and solves the crimes in the neighbouring woods keeps us hooked. Catherine Zeta-Jones as Morticia is a scene stealer and also the alma mater of Wednesday’s new problematic school, where her mother’s former arch nemesis (Gwendoline Christie) is the headmistress. If Wednesday is the little dark cloud, her roommate Enid Sinclair (Emma Myers) is a literal sunshine barbie, who throughout the show, balances Wednesday’s weirdness with her quirky antics. It doesn’t matter if you’re a regular teenager or a psychic-danger-obsessed-mystery-resolving teenager, there’s always a love triangle—even in the world of horrors. Brooding student artist Xavier (Percy Hynes White) and lonely cafe boy Tyler Galpin (hunter Doohan) are busy fighting over Wednesday’s attention, who is more invested in chasing the ghosts of her past, present and future. All in all, season 1 gives you a taste of everything, but leaves you asking for more of the students at Nevermore. As we wait for the new season to drop, lucky for you, we’ve got all the scoop you need. 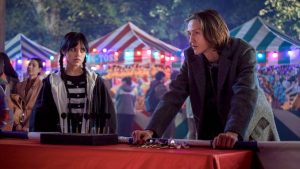 When Will Wednesday Return?

Netflix released a video of Jenna Ortega as Wednesday, in which she says, “Over the past few weeks I’ve been hunted, haunted, and mimicked millions of times across the internet. It’s been pure torture. Thank you.” Toward the end of the teaser, the happy news is announced,  “More misery is coming. The global phenomenon will return for season two.” As for the dates, nothing concrete has been released so far. Judging by the production timeline of the last season, which was 12-14 months, the new season is expected to be slated somewhere in the first half of 2024. Tim Burton and crew, head to Romania already!

Update On the Cast & Crew 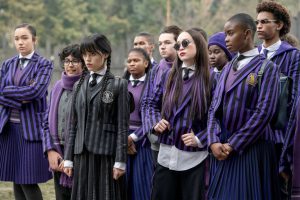 The fact that no major cast member died in season 1 means that we can hold on to the hope that they will all return for season 2. Emma Myers as Enid Sinclair, who can now fully transform into a wolf, is coming back to be roomies with Wednesday, now with additional powers of course. Enemy-turned-ally, Joy Sunday as Bianca Barclay will also return as Queen B of Nevermore. This time, we may see her and Wednesday joining forces instead of locking horns. We’re all certainly looking forward to Gomez Addams’ (Luis Guzmán) new nicknames for Wednesday. Catherine Zeta-Jones is majestic as Morticia Addams. Although, we’re a little disappointed with the lack of scenes between the mother-daughter duo, hoping to see that change in season 2. Xavier Thorpe, played by Percy Hynes White, now has a real shot with Wednesday and he is already making moves. It will be interesting to see their chemistry in season 2, now that there’s no distraction. Speaking of distractions, Tyler Galpin (the Hyde monster) is now on the run but mostly will return with vengeance, since his character was not killed in the last episode. Last (but definitely not least) Christina Ricci a.k.a the OG Wednesday from the 90s may be back to settle the scores Wednesday, after her first failed attempt. As for new faces (or faceless demons), it’s Tim Burton, he will definitely have something up his sleeves. 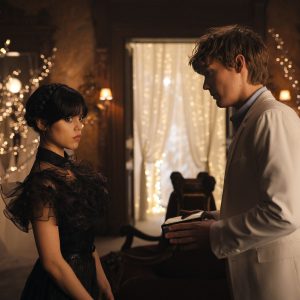 The Plot And the Plot Twist

Although most of the loose ends from the last season were tied in the finale episode, there’s a possibility that a few arcs from season 1 may continue in 2. For instance, the history of Tyler’s demonic transformation is still pretty bleak and a little back story with more context with help. Before exiting Nevermore, Wednesday receives a cryptic text on her newly gifted phone, the wheels in our minds are already turning on who could it be? Principal Larissa Weems’ demise was a hard pill to swallow, but we are curious to see who will fill her spot and how will the new person in charge tackle Wednesday and her grand schemes. For more on Wednesday, tap here.