5 Celebrities Whose Heartbreak Actually Did Them A World Of Good

You never get into a relationship thinking it will end. But when it does reach that stage, let’s just say it sucks, ’cause it does! We all have different ways of dealing with heartbreak. For some, it’s going on a binge-watch spree of cathartic movies that make you cry your eyes out, others turn to Taylor Swift songs to give them solace. Some might find comfort in their comfy couch and in endless tubs of chocolate ice cream. And there are some who go all out and get a makeover, a swanky new haircut or who glam up so their insta stories are them just strutting their stuff.

You’ve probably noticed that when celebrities go through a bad breakup or divorce, a lot of them. Of course, they too have their moments of dealing it with emotionally behind closed doors but when they step out in the open, it’s the confidence with which they embrace their reality in public and ready-to-move-on attitude that deserves appreciation. It takes courage and we’re here for it. Take, for instance, Princess Diana and her famous revenge dress. When King Charles III (then Prince Charles) went public with his relationship with Camila and admitted he had been unfaithful in his marriage to Diana, she took the news in her stride and attended a public event dressed in a bold black dress with bare shoulders and skirt slit, which came to be known as the revenge dress. Her courageous move serves as an inspiration till today.

Here are 5 celebrities who dealt with heartbreak or their divorce era like it was NBD and thrived after it.

While the model is yet to formally announce her divorce from her husband, she has made it pretty clear how she feels about the situation through social media. Nope, she isn’t wallowing but indirectly attacking her ex (who allegedly cheated on her) with hilarious TikToks. Besides, the girl is living her life and we love it. From donning a risque swimsuit for a Bad Bunny concert, giving herself a spontaneous DIY haircut, to dropping by Paris Fashion Week to walk for Balenciaga and having intimate dinners with Brad Pitt in Paris and NYC, EmRata is giving us lessons in how to break free from a failed marriage.

It was only after Samantha Prabhu separated from her ex-husband Naga Chaitanya that the star began to thrive. The actor made bolder and better choices. She bagged the role of the antagonist Raji in Family Man 2 and despite it being on an OTT platform, she grabbed everyone’s attention with her stellar performance, which not only opened the gates to Bollywood but also Hollywood. She is set to play the role of a bisexual woman in  Arrangements of Love, helmed by BAFTA-winning director Philip John.

How can we forget Kidman’s iconic divorce celebration after her split from Tom Cruise in 2001? The couple were married for 11 years. Although the reasons for divorce aren’t clearly known, what we are certain of is that no one looked as relieved and happy as Nicole did when she walked out of her attorney’s office after finalising the divorce. The photo has become a meme in pop culture with many women aspiring to achieve that level of joy in their divorce era. The celebrity even flourished on the professional front after the split. She won a Golden Globe for her role in Moulin Rouge in 2002, and an Academy Award, Golden Globe and BAFTA for her starring role in Hours in 2003. Her show Big Little Lies received critical appreciation and she also won many awards for it. The actress found love again and now shares a beautiful marriage with musician Keith Urban. 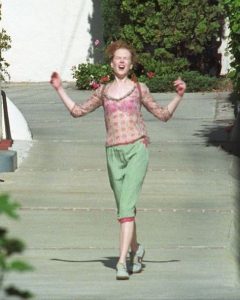 Seema and Sohail Khan have been separated for a long time but it is only recently that the couple got officially divorced. Seema addressed this in the second season of the Netflix show Fabulous Lives of Bollywood Wives. While dealing with the heartbreak was a tough phase of her life, she has moved on from it. From becoming a popular reality TV star whom fans love for her fun-loving attitude to embracing change in her personal life by removing ‘Khan’ from the nameplate outside her house, Seema is showing us how you can accept your reality and be happy with what you have achieved.

Although Kim Kardashian has gone through two divorces already, her third one with ex-husband and rapper Kanye West was rather the ugliest. She even mentioned she “feels like a loser” having gone through so many failed marriages on The Kardashians show. But nothing stopped the strong personality from falling apart in her career. Even though things got nasty, she handled it maturely. When she received the Fashion Icon award at People’s Choice Awards (which was in the middle of her divorce proceedings), she still praised Kanye in her acceptance speech. “Thank you to Kanye for really introducing me to the fashion world. I fell in love with fashion…I’m so inspired by so many people, but again, this is like a dream,” she had said.

Needless to say, Kim focused on herself and expanded her business, Skims and Skkn by Kim. She is now also the proud owner of a $70 million mansion in Malibu, which squashes rumours about who’s the richer counterpart, her or Kanye.