From Sonam, Shay To Shanina: Rihanna’s Maternity Style Has Everyone Inspired

‘Bump dressing’ and ‘style the bump’ were phrases used for celebrity maternity fashion choices until, Rihanna announced her pregnancy and threw the modest rule book out of the window. More often than not, women are expected to switch their style when they are expecting. Shopping from the maternity section in tent-like clothing had become a norm for the longest time, even celebrities who were constantly playing hide-and-seek with the paparazzi chose to conceal their bumps. The idea that a woman’s changing body required her to take a complete u-turn from her regular day-to-day style seemed unfair, and thanks to the Fenty moghul, the record has now been set straight. 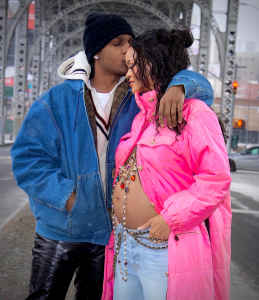 She disclosed her pregnancy to the world in a quilted pink vintage Chanel coat with an open centre front, paired with anti-fit jeans and chunky body jewellery. And just like that, she opened the pandora’s box. Greenlit by queen Riri herself, more and more celebrities are now embracing their bare bumps.

From first-time mom and fashion’s favourite straight-A student Sonam Kapoor Ahuja dressing up as a literal Indian goddess to PLL alumni Shay Mitchell going all-out in itsy-bitsy separates, here’s a list of all new moms who are celebrating their pregnancies in a whole new level of bold.

When she isn’t looking like an actual Indian mythological character dressed in all-white Abu Jani Sandeep Khosla couture, Sonam is busy taking the streets of London and Paris with sister Rhea Kapoor, looking comfortable and chic in yoga pants, a sports bra and an oversized jacket—baring her bump in its full glory. It turns out the perfect maternity uniform does exist and also doubles up as a street style winner.

Pregnant Shay is a whole different mood. Even back in 2019, when she was carrying her first daughter Atlas, the Doll Face actor managed to keep her style eccentric and quirky. Taking it up a notch with a dash of Y2k, Shay is serving looks in all-sheer lingerie, popcorn fabric cropped tops, open-buttoned summer separates and anti-fit suits with an exposed sports bra. Shay’s maternity style is part fun part risqué.

Supermodel Shanina Shaik recently announced her pregnancy on Instagram through an artsy shoot where she was dressed in a transparent shirt, holding her bare bump gently. While it was nothing short of an iconic announcement, her most recent runaway walk for Cr Fashionbook in what appears to be a white wedding dress with a giant centre-front cut-out definitely takes the cake.

Entering the next chapter of her life, fashion influencer and beauty entrepreneur Negin Mirsalehi revealed her pregnancy a few months ago. Continuing her life as she would and documenting it while she’s at it, the blogger and business owner has been staying true to her pre-pregnancy style as she’s often spotted vacationing in tiny bikinis, body jewellery and Gen-z-approved bucket hats. No extra cover-ups or kaftans for Negin.