This year, Indian representation at the Cannes film festival is at an all-time high. Deepika Padukone is a part of the jury and Aishwarya Rai Bachchan is walking the red carpet for her 20th consecutive year. Apart from the seasoned attendees, we have television actors, musicians, fashion and beauty influencers holding the fort across various events at the festival. Within a week of its opening, Indians have dominated the red carpet—quite literally.

Larger-than-life looks, statement-making voluminous sartorial choices—maximalism all the way. While making an impact is the idea behind the long, loofah-like trains—it made me wonder, do we really need to take up all the space to own the space? Sure, at a platform like Cannes, one must always go all-out to stand out, but sometimes, that means wearing a look that doesn’t drown you. 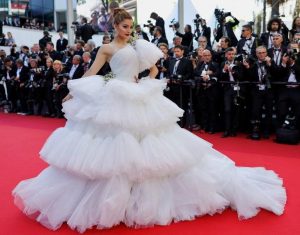 Yesterday, Hollywood heavy-weights Julia Roberts and Anne Hathaway walked the Cannes red carpet in minimal-chic looks for the latter’s period drama movie premiere. Julia wore a jumpsuit-tuxedo hybrid silhouette by Louis Vuitton and Anne made her Cannes debut in a simple, strapless, classic white sequin straight-fit gown by Armani Privé. Taking a cue from both their looks, it is evident that you can experiment and create that first-time impression, without blurring the line between couture and costume. Also, both Anne and Julia decided to make jewellery the focal point of their looks and decided to wear Bulgari’s royal blue cushion-cut sapphire necklace and Chopard’s yellow diamond necklace respectively. 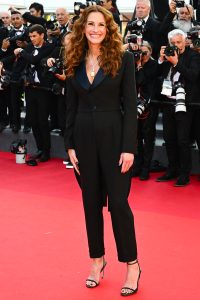 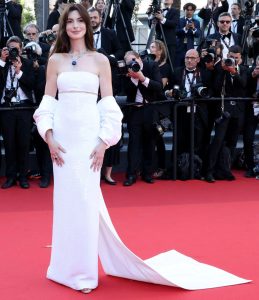 Case in point? Actors and influencers like Urvashi Rautela and Malvika Sitlani followed the tried and tested too-much-tulle formula on the red carpet, and somehow it didn’t exactly translate. Drama is subjective, and it can also be depicted without drowning in fabric. Aiming for a similar outcome, international celebrities took different and inventive routes when it comes to putting up a spectacle. 13 Reasons Why actor Katherine Langford wore an oversized barbie pink gown on an exposed bikini top in the same tone from the season’s hottest Valentino collection and Lori Harvey wore a butter yellow Alexander Vauthier ballroom styled gown sans the layers and ruffle stacking. 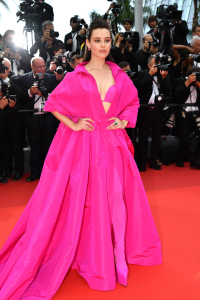 Another hit and miss this season was by Aishwarya Rai Bachchan. In the past, Aishwarya has created some of the most iconic moments on the Cannes red carpet in striking Michael Cinco and Elie Saab gowns. However, this time around, she made her first major appearance of the season in a gigantic black, 3D flower bouquet detailed attire by Dolce and Gabbana. Now, before we even get into the details about the garment, couldn’t a celebrity of her stature choose a design house whose reputation wasn’t this tainted? (in case you didn’t know, read here) An even better plan of action would have been to open this year’s series of appearances in a strongly designed look by an Indian designer. And if giving D&G a chance of redemption was of utmost importance, the actor and her stylist could have shown flower power in a little less obvious way. Remember Sonam Kapoor’s 2013 Dolce & Gabbana floral printed ball gown circa 2013? The good old days.

Floral For Cannes? Not So Groundbreaking 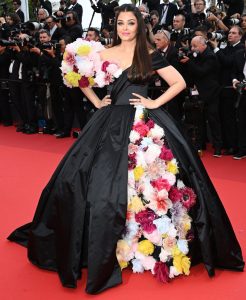 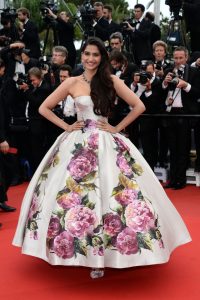 Let’s talk about the humble sari at Cannes, shall we? We’ve seen everyone from Shabana Azmi and Nandita Das to Aishwarya and Deepika wear the six yards with grace. For her first round of jury duty, Deepika stepped out in a sequin, striped Sabyasachi sari with shoulder dusters and bold black Julia Fox-esque eye makeup—which instantly made her the meme content of the day. The idea behind the sari was to portray the glitz and the glamour of the movie business perhaps? Which it certainly delivered. Wouldn’t this have been a great opportunity to present the culturally-rich textiles and handicrafts of India—since the designer who created the sari pioneers them? The drama quotient happens to have overpowered the importance of authenticity and elegance.

How Indian Is Too Indian? 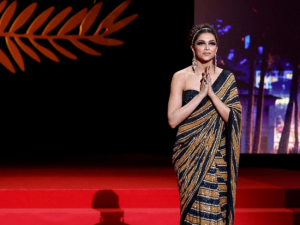 To put across a fair argument, over the last couple of years, the same set of celebrities have set a bench mark by exceptionally executing the exaggerated red carpet looks. It may have somehow created the pressure to come up with bigger and better ideas every time a celebrity walks onto the red carpet, in order to keep up with their own fashion legacy. Although, the appeal of a winning look has little or nothing to do with the circumference of the gown or the structure above the shoulder. Classic couture moments on the red carpet have time and again attested to the same.

For more on the Cannes red carpet updates, tap here.