The Indian fashion industry is mainly driven by womenswear—predominantly, bridalwear. For the longest time, grooms in India either went overboard and dressed like magicians in bejewelled garbs and feathered head gears or downplayed it completely by showing up to their weddings in basic kurtas—more suitable for the father of the bride/groom. The A-list designers had their focus locked on the brides and their expensive trousseaus, while the younger crop of creatives were looking for a complete departure from the bridal world—enters Kunal Rawal. The now synonymous name with groom’s wear in India forayed into the fashion scene 15 years ago. Instead of following the tried-and-tested formula set by his predecessors, Kunal identified the gap in the market and gambled with his gut. 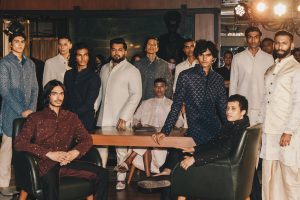 One may assume, that for an LCF graduate who became the youngest designer to find a launch pad in Lakmé Fashion Week, making a mark mustn’t have been a difficult feat. Little did everyone know—for Kunal, taking a divergent path meant creating one from scratch. “Getting our aesthetic accepted in a world where only maximalist Air India-Maharaja-like costumes were the norm was the biggest challenge. It was difficult dealing with the regressive thinking of how men are supposed to look and dress. I had to think of ways in which men could break out of the mould and start participating in conversations about their styles and outfits. Earlier, men’s silhouettes were an afterthought, even if they were the grooms. Today, men know what they want and how they want it—that’s a win for me.” 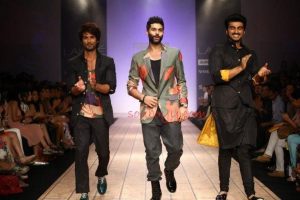 Kunal’s earliest tryst with fashion can be traced back to his childhood. The routine visits to his father’s garment factory inculcated a sense of curiosity about fashion that has been enduring. In 2006, he launched his first label ‘dstress’ and retailed in a multi-designer store like Aza. From then on, he has designed IPL uniforms for teams like Rajasthan Royals and Royal Challengers Bangalore, collaborated with Salman Khan on ‘Being Human’ and crafted wedding ensembles for celebrities like Shahid Kapoor and Varun Dhawan—every aspect of his journey played an instrumental role in cementing the DNA of the brand that is Kunal Rawal. Avant-garde meets sporty-chic mixed with the deconstruction of traditional Indian menswear.

His idea was to create an identity for menswear without constraining its appeal within our geographical boundaries. The Indian silhouettes and embroideries play a catalyst in his vast vision but aren’t the only centre point of it.  Explaining his inventive ideology, Kunal further explains “I love playing around with the ethnic Indian silhouettes—by dismantling it, styling it in interesting ways to create new shapes and silhouettes for occasion-wear. We keep experimenting with surface textures, embroideries, tech, etc. It all comes from me not seeing our traditional garments as something bound to India. I see it as an aesthetic product(s) that can be worn by anybody and everybody and it totally follows the global trend of cross-cultural influences. A big part of my inspiration is young India—the people who are wearing it and the lifestyle we lead in India today. The changing market, the changing environment when it comes to menswear especially is what drives me to keep finding that sweet spot.” 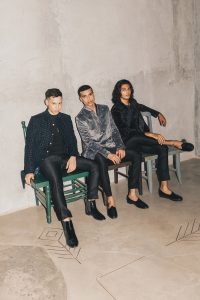 While conversations and executions around diversity in womenswear have fuelled over the last couple of years—menswear in India hasn’t quite caught up.  From runways to campaigns, the identical chiselled jaws and abs remain to be the norm with a few exceptions including the label Kunal Rawal. For his last couple of presentations, Kunal opened the doorway for men from different walks of life—representing varying different shapes, identities and ages. His catwalk mostly steered away from heterosexual machoism—now, it intentionally paints a realistic and more inclusive picture for everyone that identifies with his brand. “Gender fluidity has always been woven in our storytelling, garments, styling and castings. In India, fashion was caged for a long time—especially with menswear. It’s so exciting to be a young designer in India today because representation means endorsing unique identities—celebrating sizes, shapes, skin tones, and heights beyond the regular standard of beauty set by society. And while we are at it, it also makes for a prudent business decision because people want to see how a garment will look on them. I personally have been in different shapes and sizes in my working life and I would always want to see how a garment looks on a similar body type.” 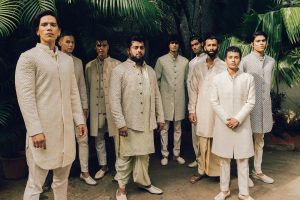 For many, 15 years in the business may seem like a good time to rest on the laurel—but for Kunal, he is just about done scratching the surface. “It has been a long, rewarding journey but there is so much more that awaits us and as a designer and an entrepreneur, I am excited to push myself even further. I don’t know what the future holds, but what we do know for sure is that we are going to have so much more fun experimenting along the way.”

For more on Indian designers and their journies, tap here.